ASHES AND DIAMONDS (Popiol i Diament)

“This taut political thriller is a fine example of one of the first Polish New Wave films.”

This is the concluding and best film of Andrzej Wajda’s trilogy (“A Generation-1954” and “Kanal-1956”). It’s also, like the others, about the effects of World War II on his own generation. It’s cowritten by Wajda and Jerzy Andrzejewski and is based on Andrzejewski’s novel. This taut political thriller is a fine example of one of the first Polish New Wave films. It’s best known for the quirky performance from Ukraine-born Zbigniew Cybulski, who was considered to be Poland’s answer to James Dean. He also died accidentally at a young age, but unlike Dean he died in a 1967 train accident when he slipped running to catch a train and was crushed to death on the tracks.

“Ashes” is set on the last day of World War II, on May 8, 1945. A two-man Polish Resistance hit team, the youngest member of the group, a twentysomething named Maciek (Zbigniew Cybulski) and his superior Andrzej (Adam Pawlikowski), are ordered by their major to kill the newly appointed Communist Party district secretary Szczuka (Waclaw Zastrzezynski) while he’s visiting a small provincial Polish town to celebrate the war victory and the mayor’s appointment as a Minister of Health. The hit men bungle the mission by killing two innocent cement workers and are further ordered to hang around town and complete their assignment. While waiting in his hotel, lodged in the room right next to Szczuka, the sunglasses wearing Maciek falls for the attractive world-weary blonde barmaid Christine (Eva Krzyzewski). She’s afraid to get too close to him when she learns he’s leaving in the morning. Falling in love with her makes him question his mission, of all the lives that have been taken in the war, if the killing will ever stop, and if the struggle is really worth it. There are some deliriously wonderful scenes such as the lighting of the drinks at the bar for the dead resistance fighters from their outfit, the upside down Christ in a bombed-out church shelter as the lovers talk about how crazy the world has become, and the execution by the conflicted Maciek of the target and then while fleeing his agonizing death on a rubbish heap that’s filmed in a slow motion polonaise.

“Ashes” is filled with anti-Soviet propaganda, striking visuals and offers a harsh view of the resistance fighters and their ideological struggle. Not the masterpiece some proclaimed it early on, but it still has some powerful moments that are haunting and admirably executed. 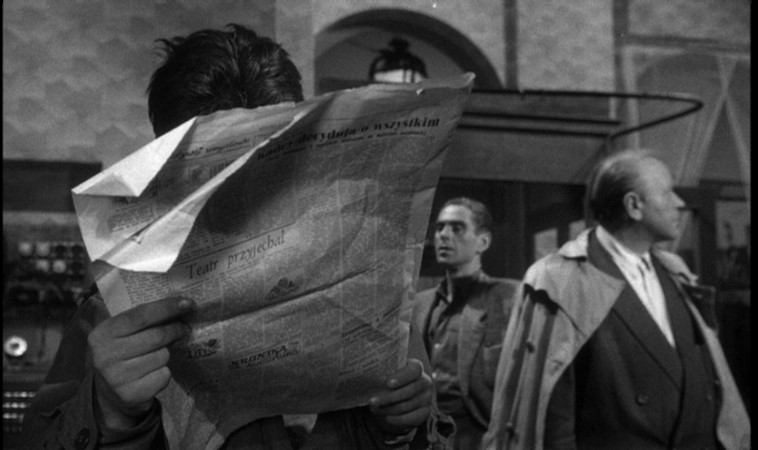