“The current NRA spokesman Heston is just right for such a controversial part, and gives the western some firepower.“

A routine oater that never quite comes to life, though director and writer Charles Marquis Warren does what he can to pump up the slight story. It is adapted from the novel “Adobe Walls” by W. R. Burnett. It is based on the real incidents in the life of Indian scout, Al Seiber. To its credit it doesn’t back away from dealing with the touchy questions over white-Indian relations.

Arrowhead takes place at Fort Clark in Texas, in 1886, around the same spot and time frame the real story happened. Charlton Heston was raised by Apaches and hates them with a vengeance. He is Ed Bannon, renown as chief of scouts for the cavalry, who is both arrogant and heroically rugged. The action takes place at Fort Clark in Texas. Heston does not trust the new Apache peace plan with its chief Toriano (Palance), feeling that the Indians will not keep their word because they are savages. Toriano is the old chief’s college-educated son, who has rejected the ways of the White Man and returns to his people to reclaim his birthright by becoming a warring leader. Heston was raised with the current chief and considers him to be evil. The army is anxious to get the Indians to a reservation in Florida and do not want Heston messing up the peace plan. The cavalry is under the command of the more level-headed Captain Bill North (Brian Keith) who is also interested in the same army widow as Heston is, Lela Wilson (Sinclair). When things go wrong Heston is blamed, but by the finale he is proved right for his concerns as the Apaches ambush the cavalry. This film does a number on the Indians as savages, with Heston spewing all the hate. Milburn Stone is Heston’s sidekick and his most loyal friend. The film ends with a winner-take-all fight between Palance and Heston. There’s enough action to keep this Western moving at a quick pace, as the enmity between the scout and the Indian chief is resolved on the battlefield.

The current NRA spokesman Heston is just right for such a controversial part, and gives the western some firepower. 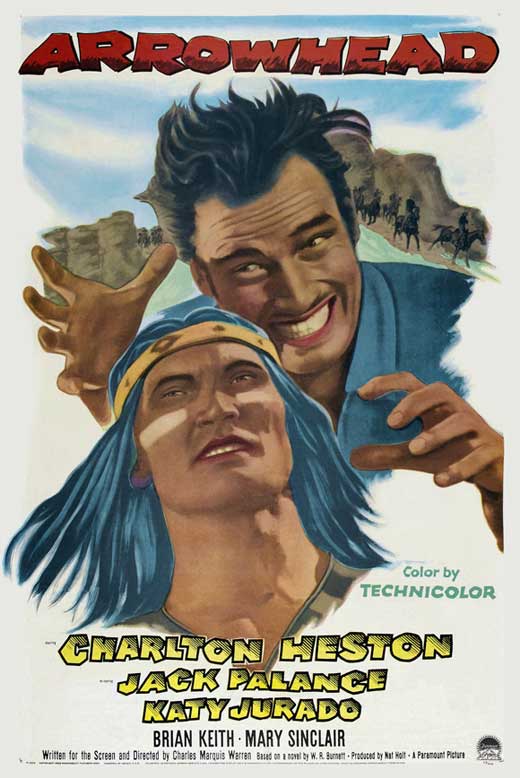