“It’s a wonderfully vibrant film that connects to the Depression-era working-class films in America.”

Araby takes its title from one of the stories in James Joyce’s Dubliners (1914), a narrative it might have wanted to follow but abandoned. The film is laden with stories, songs and jokes, like the one about Brazilian laborers being flown into the Middle East. But the movie has nothing to do with Arabia, only taking its title from the Dubliners.

The withdrawn, loner, chain-smoking, aimless teenager Andre (Murilo Caliari) lives with his ailing younger brother, sick with an undisclosed environmental ailment, in an industrial town in southwestern Brazil, that’s near an old aluminum factory. Since their parents travel a lot, the kids are looked after by Aunt Márcia (Gláucia Vandeveld). When the forty-something factory worker, Cristiano (Aristides de Sousa), a friend of his aunt’s becomes comatose in an off-camera on-site incident, Andre is sent by his aunt to get his belongings in his house. Andre discovers there his journal and can’t resist reading it.

The film now uses the laborer to narrate his own story as written in his diary, which he started writing after encouraged to do so by a theater group at the aluminum factory. His carefree wandering life takes us to inland Brazil, to the southeastern state of Minas Gerais, where for a decade he works at many menial jobs. He begins a romance with co-worker Ana (Renata Cabral) but loses her. Cristiano’s tale tells of how after released from prison he took to the road and many farm labor jobs, where he further developed a political awareness by hearing all kinds of stories from his fellow laborers. When he becomes overwhelmed with depression, the once happy-go-lucky guy, takes his first factory job in the aluminum plant in Ouro Preto and we sense his life is just about over.Anocha Suwichakornpong’s song By the Time it Gets Dark becomes the theme song of choice.

The movie uses the coworkers to play many lively folk tunes by Brazilian traditional musician Renato Teixeira and a sad piece by the Tunisian composer and oud player Anouar Brahem.The film premiered at IFF Rotterdam and played the festival circuit where it used Townes Van Zandt’s “I’ll Be Here in the Morning,” but when unable to obtain the rights for it replaced it with the equally fitting By the Time it Gets Dark. It’s a wonderfully vibrant film that connects to the Depression-era working-class films in America. It tells us we live and die with our stories so we can explain our life before it’s too late. 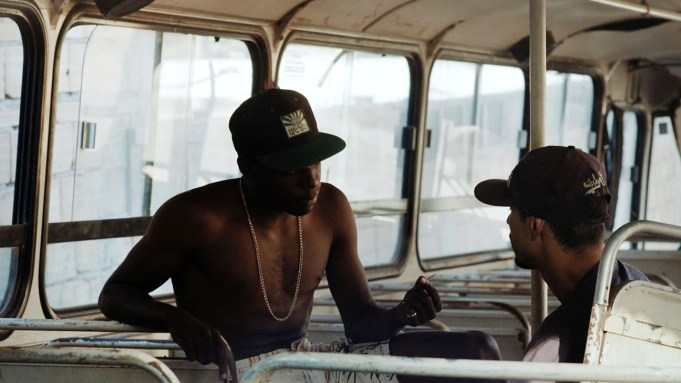