It’s an A-budget stately Western that follows the conventions of the old B-westerns with a modern approach and does it well thanks largely to the acting chops of two of the best in Hollywood, Ed Harris and Viggo Mortensen (they also costarred in “A History of Violence”). There’s also a surprisingly good performance by Renée Zellweger, who is more pleasing in this supporting role than how I usually find her when she’s asked to carry a pic. As the film is just as much a romantic comedy as it is a gun dueling Western, her beguiling character role helps get the story over its many clichéd moments. Ed Harris (“Pollock”) also puts on his director’s hat (cowboy style black hat) and bases it on the novel by Robert B. Parker, and cowrites it with Robert Knott.

In the struggling frontier mining town of Appaloosa, in the New Mexico Territory of 1882, hardnosed lawmen-for-hire, the tight-lipped marshal, Virgil Cole (Ed Harris), and his more erudite Southern-born West Point grad longtime partner, the deputy Everett Hitch (Viggo Mortensen), are dudes with a bad-assed rep as killing machines and are hired by the frightened oily city leaders to restore law and order after the previous marshal and his two deputies are missing. In the opening scene we see the marshal, Jack Bell, and his deputies shot down in cold blood by the craven Randall Bragg (Jeremy Irons) when they go to arrest two members of his large gang for murder and rape. It’s incredulous to believe a sane lawman would undertake that task in such a carefree way when he knows he’s outnumbered and the gang leader is such a vicious creep with connections to President Chester A. Arthur, who thinks because of that he can get away with even murder. Bragg pretends to be a cattle rancher, but is really scheming to take control of the town through intimidation. The town leaders (one being the Brit actor Timothy Spall playing a cowardly but polite storekeeper) quickly agree, after a second or two of hesitation, to make the new lawmen virtual dictators, enforcing any law they see fit to put on the books. At the same time, a cultured, finely dressed, piano playing but flat broke attractive widow Allie French (Renee Zellweger) arrives in town and Virgil is all over her like hot butter on a biscuit. While they plan marriage and get ready to occupy a newly built house Allie comes on strong to the loyal Hitch, who rebuffs her but doesn’t tell his pal that his dream girl is promiscuous to the point that she has no scruples bedding down with a man that’s not her boyfriend.

When one of Bragg’s gang (Gabriel Marantz) tells Virgil he’s no killer and that he’s willing to testify he saw Bragg gun down Bell, the lawmen sneak up on Bragg in his ranch as he comes out of the outhouse and take him under duress to the town jail. Somehow Bragg hires the Shelton brothers (Lance Henriksen & Adam Nelson) to abet his escape after he’s convicted and set to hang in another town. They kidnap Allie and force Virgil to release his prisoner from the train to spare her life, as the action now takes place near the Mexican border in Indian territory. This twist leads to admittedly some farfetched doings, as the lawmen give chase and are determined to get their slimy bad man Bragg no matter what it takes–whether in a showdown in a dusty Mexican square or back in Appaloosa when Bragg’s connections come through with a Clinton-like pardon.

The film’s simple pleasures are taking in Harris and Mortensen as they trade old-married-couple retorts. They bring a sense of comedy to the killing fields and a male bonding that comes from a deep sense of devotion and brotherly love (it plays things straight and has no “Brokeback Mountain” intentions). It’s likable as a more or less traditional Western with a lot of quirky moments, but one that has no pretensions of being visionary or more eloquent than just dropping names like Emerson to give it an appealing intelligent feel that ensures us it’s just no ordinary oater. If you are alright with that, you’ve got a pretty good picture despite it not being memorable and its many flaws. 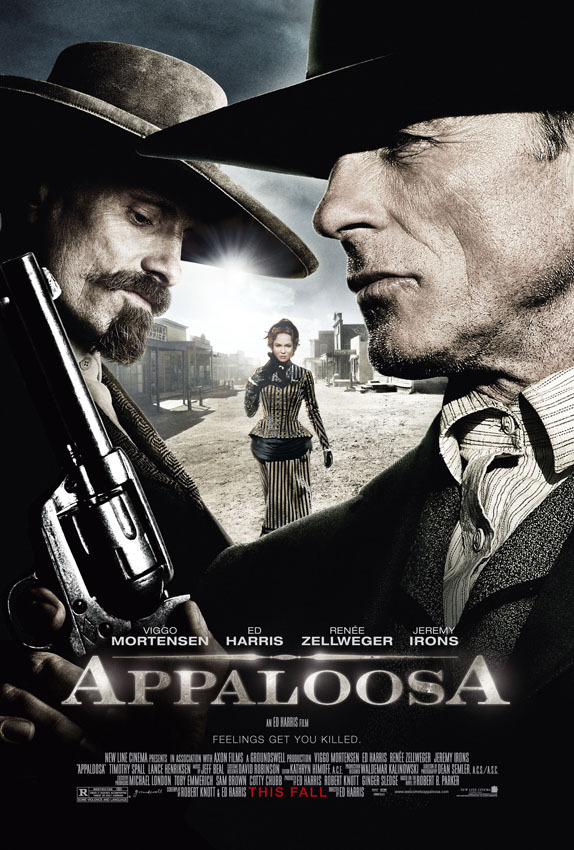