Woody Allen’s (“Stardust Memories”/”Crimes and Misdemeanors”) 17th film is indebted to Ingmar Bergman, especially his “Wild Strawberries.” He even borrows the Swede’s cameraman Sven Nykvist. The problem is that it’s too overstated in making its points, too coldly stylized to be as deft as a Bergman work, and too superficial to offer anything original or much that’s substantial. It’s a gloomy and humorless self-conscious melodrama about a woman college professor’s midlife crisis at age 50. Even though it’s intellectually sound, it lacks depth and its literate script seems forced. Intellectually posturing, it brings up the German poet Rilke in a conversation that does not add to the plot. The high culture background to the narrative seems pretentious and cold. It’s a sterile cerebral work that never reaches the heart or never gets past its setup of characters boiling over with inner turmoil, therefore it’s hard to really care about any of the characters.

Marion Post (Gena Rowlands) is the head of her college’s graduate philosophy department. She has recently remarried Ken (Ian Holm), a successful cardiologist and similarly an effete intellectual, who while married seduced her into an adulterous relationship. On a sabbatical to write a book on German philosophy, she rents a cozy apartment in downtown NYC to have solitude. Through the radiator she overhears the analysis sessions from the next door psychiatrist’s office and becomes especially interested in the sessions with the suicidal Hope (Mia Farrow), whose marriage is on the rocks as she questions the meaning of life. There’s a transference and Hope’s running therapeutic presentation of her misery is the catalyst that gets Marion thinking about her life.

Through Marion’s present relationships with family, idolizing stepdaughter (Martha Plimpton), friends, flashbacks, a number of incidents and dreams, we discover that the self-satisfied Marion has led an empty life by repressing her feelings and ignoring that she’s not happy but only pretending to be happy. Her actress friend Claire (Sandy Dennis) will reveal how much she dislikes her and her married friend Lydia (Blythe Danner) will surprise her by becoming the title’s “another woman” by having an affair with Ken. This ‘what goes around comes around’ scenario shakes the firm foundation of the professor’s safe life. By this time Marion has revealed herself as a woman capable of being intimate but hasn’t allowed herself to feel, instead is quick to judge others for their flaws and stir up their resentment without her realizing it. She is also resented by her struggling businessman brother Paul who was always treated as a loser by their standoffish widowed history professor father (John Houseman), while Marion was the apple in his eye because of her scholarship. The man who really loved her, writer Larry Lewis (Gene Hackman), Ken’s best friend, was rejected because she was too blind to see he was the right man for her and that Ken was a cold, calculating user. The psychological drama is resolved as Marion now seems ready to face the truth after experiencing a few critical setbacks.

Gena Rowlands inhabits the complexities of her character and gives a perfectly nuanced performance that has everything but warmth. That’s not the fault of the actress, but in Woody’s script. 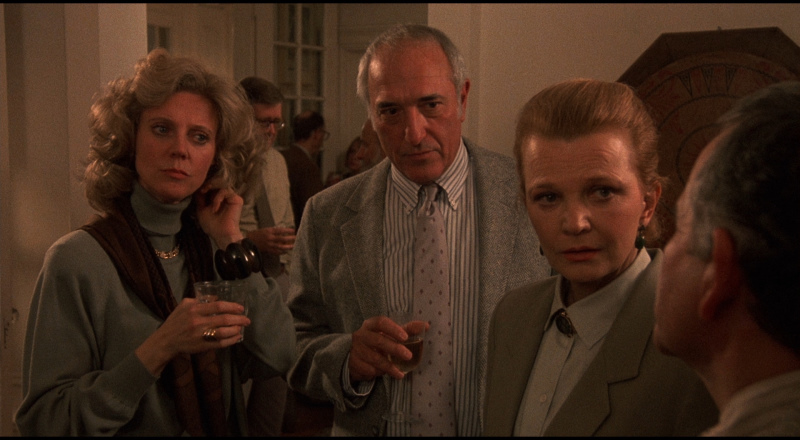