A NIGHT IN CASABLANCA

The first film from the Marx Brothers since their retirement in 1941 is one of their poorer efforts, weighed down with too much plot, but still has a few zany slapstick routines to be mildly entertaining–especially the one where the brothers delay Nazi spy Sig Ruman from fleeing from Casablanca with stolen wartime loot by emptying his trunks as soon as he packs them. The boys came out of retirement in this comeback film, after a few stinkers for MGM, to help Chico with his gambling debts. The brothers independently produced their penultimate film, with them receiving a healthy percentage of the film’s profit. Archie Mayo (“Night After Night”/”The Mayor Of Hell”/”The Petrified Forest”) safely directs by staying out of the way of the Marx Brothers. The title aims to take advantage of the recent popular Warner Brothers’ film Casablanca starring Bogie and Ingrid Bergman, as it spoofs Nazi spy films.

After three managers at the Hotel Casablanca in Morocco die suspiciously, the prefect of police, Capt. Brizzard (Dan Seymour), with the approval of his boss, Governor Galloux (Lewis Russell), recruits as his new manager the bumbling Ronald Kornblow (Groucho Marx). The earnest disgraced French pilot, Lieutenant Pierre Delbar (Charles Drake), tells the French police that during the war he was forced by the Nazis to fly an airplane filled with stolen French art and jewels to South America and purposely crashed the plane in Casablanca, where the treasure disappeared. Pierre is convinced that the missing loot is hidden somewhere in the hotel, which at the time was run by Nazis, and that is the reason for the recent murders.

We soon learn that a guest in the hotel is wanted Nazi war criminal Heinrich Stubel (Sig Ruman), a sadist who is disguised in a toupee as Count Max Pfefferman and who is being helped by the attractive femme fatale Beatrice (Lisette Verea) and two Nazi flunkies (Frederick Giermann & Harro Mellor). Stubel intends to remove the hidden treasures from a secret place in the elevator shaft and wishes to eliminate the managers so he can pull off this heist undetected.

To the rescue come Rusty (Harpo Marx), the mute valet of Max’s, and Corbaccio (Chico Marx), the fast-talking owner of the Yellow Camel Company. They save the womanizing wacky manager from Beatrice’s plans to get him alone in her room and have Max legally kill him for fooling around with his woman.

The poorly realized overplayed climax has the Marx Brothers board the Nazi’s escape plane while in flight and to fight off the Nazis before they can escape to Tunis with the stolen loot. The slapstick comedy antics and string of relentless Groucho one-liners seemed more tired than subversively funny.

Frank Tashlin (later to become a noteworthy comedy director for the Martin and Lewis films) received no screen credit but reportedly conceived Harpo’s visual gags, including the very funny opening one of the building collapsing after a cop orders Harpo to beat it while sardonically asking him as to whether he thinks he’s holding up the building. 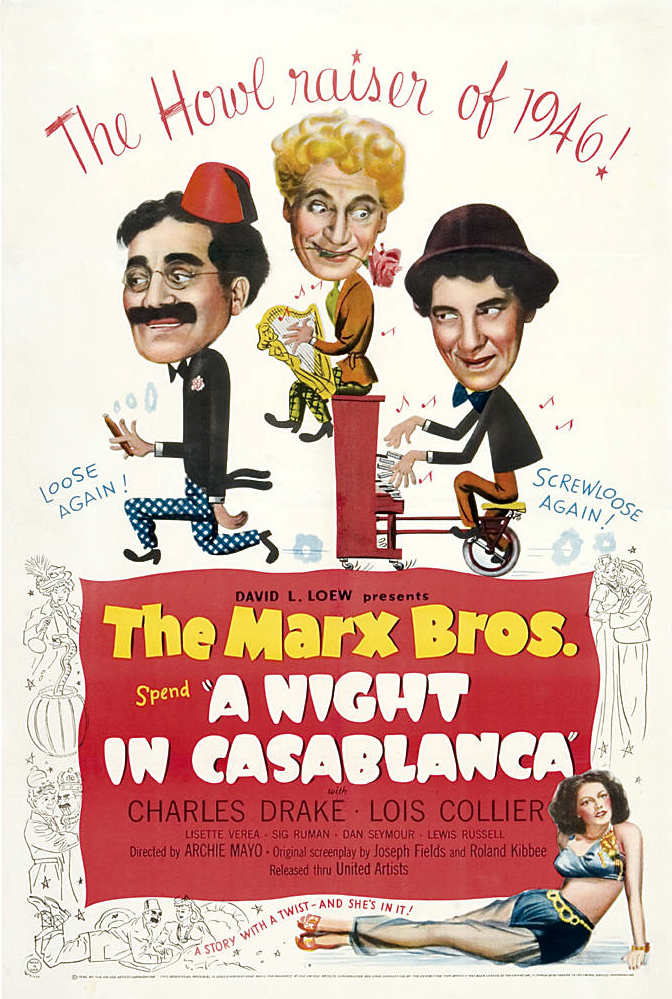