“The problem with the film, was that it was tedious and had no emotional oomph.”

A sophisticated mid-Victorian drama, told in the form of an allegory, about upper class society, playing more like a PBS special or a high-brow Merchant-Ivory film but with a darker secret to tell. It comments on the environment influencing one’s behavior more than anything else, as the female protagonist is studying a colony of red ants attacking black ones. This model is compared with the behavior of civilized society in England.

William Adamson (Mark Rylance), the son of a Scottish butcher, who is a naturalist, returning from a 10 year exploration journey in the Amazon jungle, surviving a shipwreck where he lost all his collected specimens except for the rare butterflies he brings back to his patron. His patron is the enlightened Sir Harald Alabaster (Kemp), who believes in the Creator but accepts Adamson’s beliefs in Darwin’s theories just published at the time. Sir Harald encourages William to stay and live on the estate and help him organize his own naturalist collection according to scientific rules.

After William meets his patron’s daughter Eugenia (Kensit) on the dance floor, he finds out she was engaged to a Captain Hunt who killed himself rather than marry her. This suits William fine and he asks Eugenia for her hand in marriage. The destitute scientist is quite surprised that she accepts his sudden proposal and agrees to marry him in a double wedding with her younger sister Rowena (Saskia). To him she is like the butterfly, so delicate and beautiful to behold.

The Alabaster family is put under the microscope and the kindly but obsequious William observes first-hand how different each member of the family is. Eugenia’s brother Edgar (Henshall) behaves boorishly toward him telling him he despises him for marrying his sister, that he could never be one of “them” because he has poor bloodlines. The mother (Badland) is an obese woman always collapsing from exhaustion, who is used to being pampered and surrounded by servants who feed her strawberries in cream and other elegant treats. She might be compared to the queen bee in the insect family, who is always being cared for.

Insects were easy to find as comparisons to family members, but angels is a different story. Matty Crompton (Kristin Scott Thomas) befriends William because they have similar interests and mentions that “There are people in houses who know everything, yet remain invisible.” This statement refers to the servants, and that might be the closest we come to anything resembling angels in this film.

Meanwhile Matty, who is reminiscent of an ant-like creature, is taking up a study of an ant colony on her own so she can publish a book — and is also becoming closer to William, as he realizes he has more in common with her than with his beautiful but cold wife. Matty is the household tutor to the family’s younger children, the poor cousin of theirs. She has been attracted to William for some time, but he hardly notices her. She chastises him one day by saying to him, “You do not know if I am aged 30 or 50”. He does notice her wrists when she draws the insects so perfectly, and feels very close to her intellectually. If one can read his mind, he is saying to himself I shouldn’t have married for looks.

The film enters a period where the years pass by with William living a comfortable but not fulfilling life. He also fathers a few children, whom he does not feel strongly about. He is like some insect who is trapped in a spider’s web and can’t get out, until he learns about a dark secret that he can’t bear to live with. And the very cautious and measured man must choose between going back to the uncivilized Amazon jungle or remaining in luxury in the most civilized of all nations.

The film was visually pleasing; the costumes were beautiful; the script was acceptably literate, and the film ably took the viewer into an antiquated world and its peculiar customs. In one shot, the many maids who worked at the estate turned their back to the wall in the presence of their betters, giving one a rough idea about life there. The problem with the film, was that it was tedious and had no emotional oomph. The acting was stiff. The pace of the film was lethargic. The most interesting sights were the insects themselves, but is something that the Discovery Channel still does better. Though a competent production, the dramatic events were done in too clinical a manner. 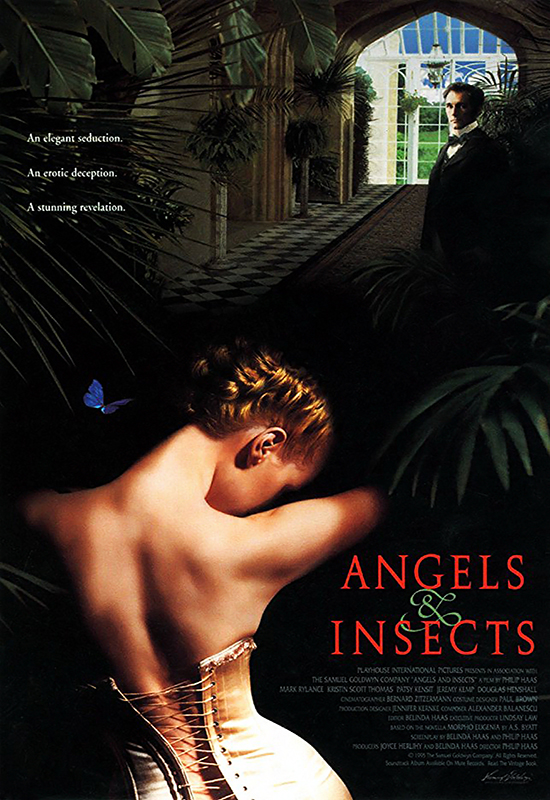