“I would have appreciated the film more if it was less talky and if it didn’t completely ignore the obvious that fighting madman Hitler was necessary.”

This sharp political satire is adapted by screenwriter Paddy Chayefsky from William Bradford Huie’s best-selling novel. Chayefsky debunks militarism in favor of pacifism by having his main character say things like “We perpetuate war by exalting its sacrifice” and “I’m not sentimental about war. I see nothing noble in widows.” It somehow is amusing as a black comedy despite the humorless direction and one too many long-winded speeches needlessly kept in by Arthur Hiller (“Love Story”/”Plaza Suite”). Julie Andrews goes against the grain of her Mary Poppins image, as she has a non-singing spicy role as a Brit war widow who falls for a slick American naval lieutenant commander played by James Garner.

In early May of 1944 during WWII, Charlie Madison (James Garner) is an American naval officer stationed in London and assigned to be a “dog-runner.” He works for Admiral William Jessup (Melvyn Douglas), meaning he looks after all the drunken Admiral’s needs such as getting him the best steaks, the best booze, pimping women and getting bridge partners. They all reside in a swank London hotel, which seems vulgar that they are living so luxuriously in the middle of a war. The wheeler-dealer lieutenant commander takes pride in being a self-confessed coward and avoiding battle, and setting the best table for any officer in Europe. Emily Barham (Julie Andrews) is the prim motor-pool driver assigned to Charley, who is tired of losing those dear to her during the war such as hubby, hero father and brother. She reluctantly turns a blind eye to Charley’s character flaws and begins a whirlwind wartime romance.

With the impending Normandy invasion looming in the near future and the army about to receive all the credit for the invasion, Admiral Jessup decides that he needs a navy hero and comes up with the brainstorm that “the first man to die on Omaha Beach during the D-Day Invasion should be a sailor” and he orders, to Charlie’s horror, that he’s to be in charge of making a movie of that invasion.

James Coburn bolsters the story by his strong supporting role as Charlie’s best friend assigned to be a desk jockey on the Admiral’s staff who turns gung-ho when he remembers he’s an “Annapolis man.” Liz Frazer offers some comic relief as a motor-pool driver with Emily who gladly accepts the Americans’ gratuities such as dresses and silk stockings. Melvyn Douglas as the nutty but sympathetic admiral, plows the course the film takes in being irreverent to a certain point but backing off enough to show that during war you need those who are willing to make the ultimate self-sacrifice for country.

I would have appreciated the film more if it was less talky and if it didn’t completely ignore the obvious that fighting madman Hitler was necessary. 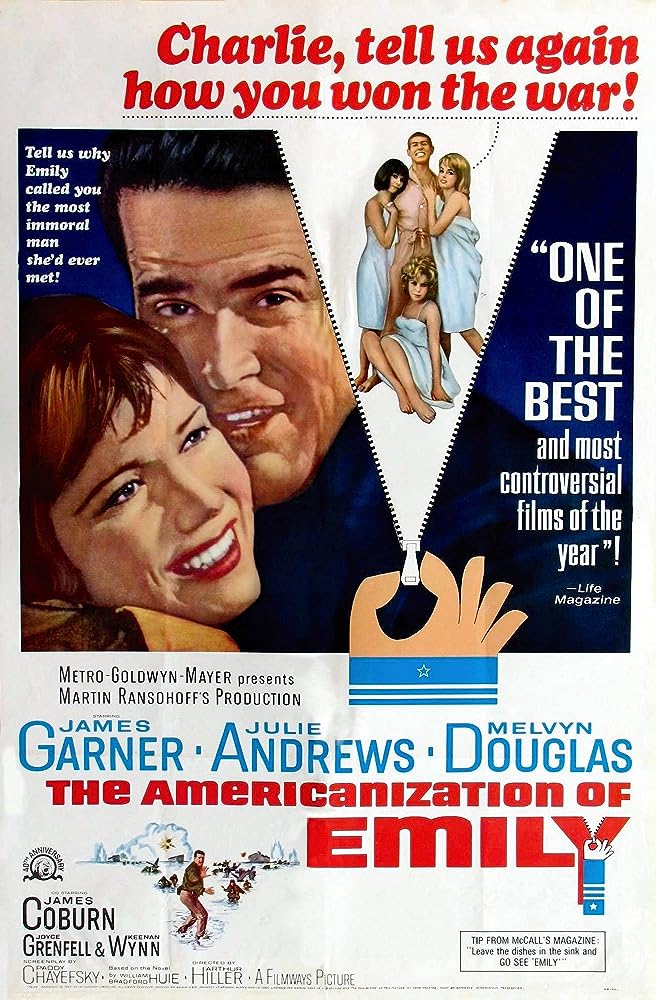