“A claustrophobic tale of an elderly mother, her son, a nurse, a lodger, and the nurse’s boyfriend living in the same apartment.”

A claustrophobic tale of an elderly mother, her son, a nurse, a lodger, and the nurse’s boyfriend living in the same apartment. It takes place in the Hungary of the early ’80s, when there was a housing shortage. Bela Tarr, who is in his early forties, is a prominent figure in the Hungarian film movement, much influenced by John Cassavettes and Andrei Tarkovsky. In his brief film career he has just made six films, including the critically acclaimed Damnation and Satantango. His films are noted for not being linear narratives and for examining people who are in a state of moral decay. He is most interested in relationships and how people survive, and to find out what is real and what is an illusion amidst the corrupting system they live in.

The film opens with a quote from Pushkin, “Even if you kill me, there will be no trace of me, only the Devil will be going round and round in circles.”

The content of Tarr’s film usually overrides its style, at times he seems to care very little how his film looks. This stylish film is a minor transformation for him. It is accomplished with his camera capturing some unique footage of underground shots of an argument in progress, as he amazingly views his subjects in a way they never expected to be seen.

The plot revolves around the occupants of a large apartment, desperately trying to relate with each other: fighting over financial matters, trying to establish their sovereignty, revealing their fears and their loneliness, grasping for love, and all the while clinging to each other and hating themselves for it. To say that this a harsh tale is to really note how bleak their lives are, how grim the large apartment is, and how unsatisfying is their love life and everything around them.

The mother is the central figure of the story. She has the money and owns the apartment and as the poet, William Blake, says, “The Devil holds the moneybag.” Her son is confused, full of hate for his mother and self-hate for himself. He threatens to kill her in one of their arguments. All indications point to these arguments taking place over a long period of time. He is a drunkard, in his early thirties, unable to hold onto a regular job, surviving on his mother’s coattails. She doesn’t fail to mention this, irritating him even further. Their conversations are so tense, that there seems to be no hope for a reconciliation.

The nurse is a conniving temptress and slut feigning concern for the old lady, but really using her as she uses everyone else she comes into contact with, interested solely in her own pleasures. The confrontation between her and the old lady makes for powerful drama, as each is possessed with a determined and warped will; each with a need for supremacy over the other.

The lodger is a pathetic figure — an old drunken man, in deep financial trouble, reduced to being a thief; thereby, even discarding the only thing he has left that is honorable: his reputation as a once upstanding teacher. The nurse’s boyfriend is a user of people, a hostile person with no direction to his life and no love in him. All these characters are emotionally distraught, suffering from jangled nerves and loneliness.

Tarr’s camera is everywhere: under them, over them, close-up, and panning the room. His choice of garish colors for the grim apartment is curious and provoking. This is a tough film to watch, but if you want to see something introspective, something that has a rawness to it that is uncompromising, then this existential-like film fits the bill. It generates an uncomfortable and uncompromising tension that is very perceptive about the human condition. Above all its message is you must love someone, which is easier said than done. The filmmaker subtly asks the question of all his characters, what is it that you believe in? 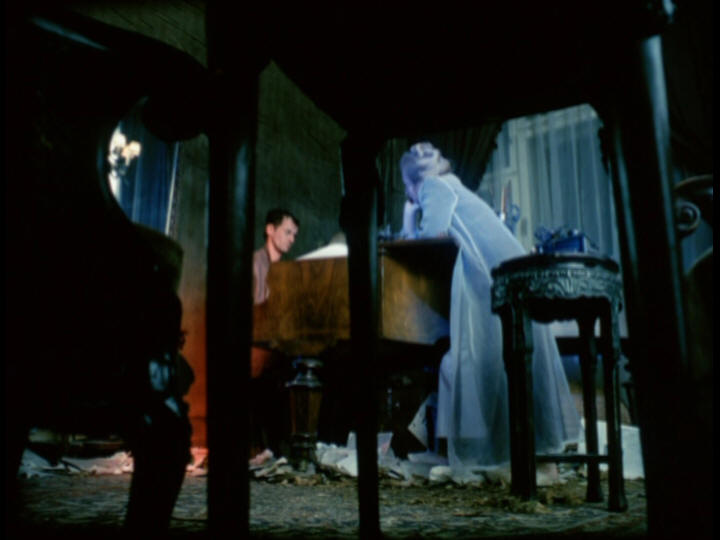 REVIEWED ON 1/28/99 GRADE: A  https://dennisschwartzreviews.com/