A KISS BEFORE DYING

“This psychological thriller is penned by Ira Levin, of “Rosemary’s Baby” fame…”

This psychological thriller is penned by Ira Levin, of “Rosemary’s Baby” fame, and produced by Robert L. Jacks, the son-in-law of Darryl F. Zanuck, the head of Twentieth Century- Fox, which allowed him to cast those under contract to Fox to star in it.

Budd Corliss (Robert Wagner) is an ambitious, gold digging, handsome, smooth talking 25-year-old student in the state university in a small California town. He is from a humble single-parent home and has met a very wealthy girl, Dorothy Kingship (Joanne Woodward), at the college, where they have a secret romance. When she tells him she is two months pregnant he becomes upset because he realizes her stern father (George Macready), whom he has not met as of yet, will never accept him under those conditions; and, he is fearful that if they got married without her father’s permission, she would lose her inheritance. Budd tries to put off the wedding plans, but Dorothy tells him she doesn’t care about the money or what her father thinks and will live with him anywhere.

Budd is not only a fast talker but he is treacherous, and plans Dorothy’s death to appear as a suicide. He tries to kill her with poisons he steals from the college lab, telling her they are vitamins given to him by a friend of his working in the pharmacy. But when Dorothy doesn’t take them, thinking they are meant to stop the pregnancy, Budd goes to plan B. He has already deceived her into writing a suicide note which he posted in a letter, and he now decides that they should go to the marriage bureau to get married. When the bureau is closed for a lunch break Budd talks Dorothy into going up to the roof, where he kisses her and then throws her off. Her death is listed by the police as a suicide.

A year later Budd has transferred to another state university town where Dorothy’s sister Ellen (Leith) lives with her father; and, he becomes engaged to her, without telling her he knew her sister. Ellen still doesn’t believe that her sister committed suicide, and she figures out that her sister was going to get married that day and not jump off the roof. She contacts a policeman, Gordon Grant (Hunter), about her suspicions that her sister was seriously seeing somebody on campus. Gordon was studying at the university at the time and knew Dorothy and decides to open up the case again, but not for two more days since Gordon is giving a lecture at a college in a different town.

Warning: spoiler to follow in the next two paragraphs.

Ellen can’t wait for Gordon, so she rushes back to the university Dorothy attended and gets the name of a student she dated there by the name of Dwight (Quarry). Dwight tells Ellen he doesn’t know whom Dorothy dated after him, but has his address from a party he was invited to. But Budd follows Dwight home when he goes to get the address for Ellen and after killing him, he makes his death look like a suicide.

This suspenseful story comes to a fitting climax as Gordon meets Budd in Ellen’s house and thinks he recognizes him from the university. Without any proof, Ellen fails to believe him. But the cop gets the proof he needs when a waitress says she remembers serving the couple on their dates. Ellen finds herself in danger when she confronts Budd after a car visit to her father’s plant in a remote mountainous location and tells him about her suspicions and learns the hard way that she is dealing with a maniac.

The story had a lot of holes including an inadequate explanation for Budd’s motivation for wanting Dorothy dead in the first place; but, it still played as a good nightmarish mystery yarn, with an icy Robert Wagner tremendous in a villain role for a change of pace from his usual good guy roles. 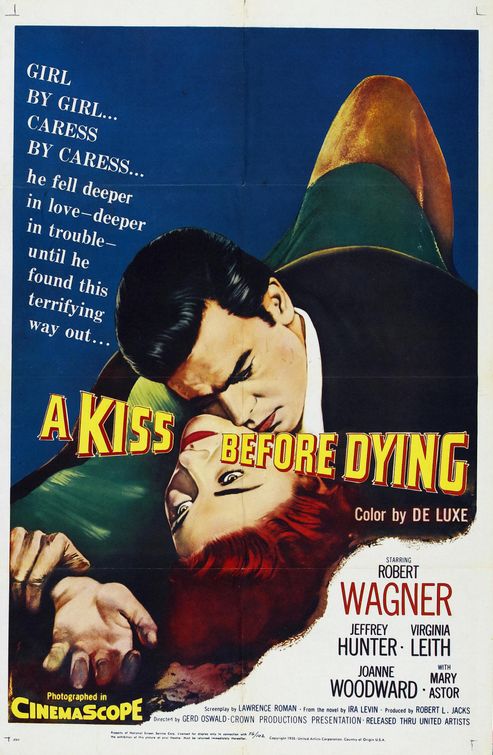