“satire about the modern world’s love affair with machines.”

It’s based on the story by Subodh Ghosh. Indian filmmaker Ritwik Ghatak (“A River Called Titas”/“The Cloud-Capped Star”/”The Golden Thread”)directs this humanistic comedy, a satire about the modern world’s love affair with machines. It’s about a comical figure named Bimal (Kali Bannerjee), who has fallen in love with his car beyond a reasonable way. Bimal is a mechanically gifted taxi driver obsessed with his run-down old jalopy, who ekes out a bare living as a cabbie and refuses his boss’s offer of an updated modern car. The auto, a 1920 Chevy, is named Jagaddal, and is the object of ridicule among Bimal’s fellow drivers, a pack of of mud-slinging adolescents and passengers, in the small country town he resides in just outside Calcutta. Bimal talks to the car as if it were a person and sneers at those who insult it. His fares are those who are desperate: a goofy uncle trying to get his goofy nephew to a nearby town to attend on time his own wedding; a bejeweled pretty young girl running away with the local Romeo; and a harried businessman who says it’s urgent that he catch the train to Calcutta and Bimal has to outrace the train to the next stop.

There’s pathos when the car breaks down and can’t be fixed, and we realize that Bimal has gone over the edge in his attachment to the car and can only be saved when he learns to laugh at himself.

Ghatak only made 9 films in his long career, and was an alcoholic who died in 1975 at the age of 50. He only became known outside India after his death, and is now considered a key figure in modern Indian cinema. 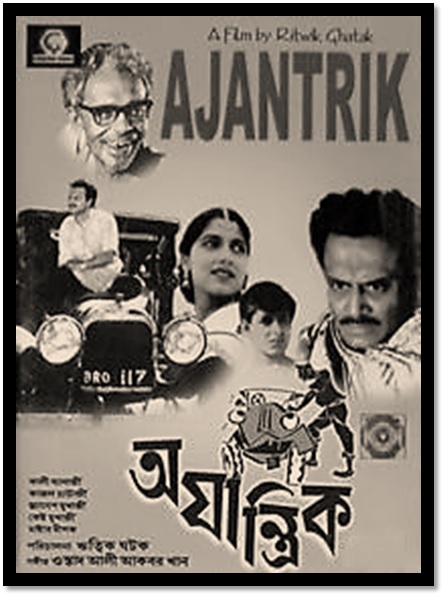 IT HAD TO BE YOU

OLD MAN AND THE GUN, THE