A HISTORY OF VIOLENCE

“Should not only entertain but make your hair stand up.”

Canadian David Cronenberg’s (“Scanners”/”The Fly”/”Dead Ringers”/”Spider”) brilliant gut-checking crime drama has something to say about the omnipresence of violence (American style!) that should not only entertain but make your hair stand up. The thriller is loosely based on the 1997 graphic novel by John Wagner and Vince Locke. It gives us violence as entertainment but makes us pay the price for being entertained, as we are made to look at its gruesome aftereffects. The film asks more of us than to just be entertained (though the filmmaker is pleased if we are entertained and laugh at the action scenarios, as if we were watching Pulp Fiction); but it also asks us to think about violence in ways we haven’t been asked to before by most films of the crime genre, though it’s shot in a similar clichéd manner as many of those films. It’s the talented Cronenberg as the perplexed moralist, who realizes that violence is part of the human condition and will always be so. The filmmaker is asking for us to search along with him on how we respond to the everyday violence we all face in our lives whether it’s a bully in school, street crime or just in our usual relationships. The filmmaker is telling us that there’s no place we can hide from violence; there’s no safe haven.

Tom Stall (Viggo Mortensen) is the nice-guy mild-mannered owner of a diner in a peaceful sleepy Indiana small-town called Millbrook (the film was shot in Millbrook, Ontario, Canada). He’s the ideal family man living out the American Dream with an adoring sexy lawyer wife Edie (Maria Bello) and two pleasant children, gentle high school student Jack (Ashton Holmes) and the cute six-year-old Sarah (Heidi Hayes). One night just before closing time two ruthless holdup men are slain by Tom before they can harm anyone in the diner. As a result Tom becomes a local hero and gets media publicity throughout the country. This leads Carl Fogarty (Ed Harris) and two of his mob boys to arrive in Millbrook and confront Tom in the diner that he’s really a Philly gangster named Joey Cusack who some twenty years ago severely disfigured one of Fogarty’s eyes with barbed wire.

The scary gang boss is attired in a dark suit and sunglasses and rides around in a black Lincoln town car while harassing Tom’s family and convincingly telling them that Tom is Crazy Joey. With no place to run to, Tom realizes his past has caught up with him and he must deal with the Philly mobsters.

There are two powerfully alive sex scenes between Tom and his wife before and after she’s aware of her hubby’s gangster past. In the first, Edie is dressed as a cheerleader and pounces on him in bed, while innocently telling him she’s role playing “because we never got to be teenagers together”; the second comes when he pounces on her roughly on the staircase after returning from confronting his flamboyant mob boss brother Richie (William Hurt) back in Philly and even though she wants to resist is turned on by his rough sex. Edie is both delighted and repelled by the sex, which is the reaction called for when we view the violence on the screen. There’s much to chew on about how sex and violence are never as far apart as one would like to think.

The film plays like a cross between a contemporary Western and a neo-noir thriller. Mortensen is perfectly cast as the stoical man searching for his true identity and drawing us to his side by his quiet acceptance of his reality. Bello is the good mother and hot wife, who has found the caring man who makes her tick but is now confused about how she should react when not role-playing and her immediate visceral reaction upon learning who her hubby really is–is to puke. Harris and Hurt have juicy character roles and are both sinisterly pleasing as dangerous villains with a sense of crass humor. This is a well-crafted film, whose violence is unabashedly staged and meant to be cathartic. It never intends to say it has all the answers, what it does is lay out its family life drama and lets us experience both their joys and sorrows as it makes us wonder if we can make peace with our violent inner trappings that are always there (even if dormant) and in certain situations jump out to the forefront. It ends on an unclear note, as it should, with the saddened nuclear family at the dinner table going on with their American Dream with a blurred sense at what is fiction and what is reality.

The film walks a carefully drawn tightrope by following along the lines of an action film but asking for arthouse responses to its violence. That it works in both mediums, is what makes this deceptively simple film such a pleasure. The film chillingly reminds you that violence is everywhere, including in our dreams. In an early scene a child is shot by a cold-blooded killer in a motel and that is immediately followed by a child waking up in a comfortable middle-class house and screaming from a nightmare. The little girl is told by her father that “there’s no such thing as monsters.” Cronenberg is telling us you can believe anything you want, but to not believe in monsters may be just as irresponsible as to only believe in monsters. 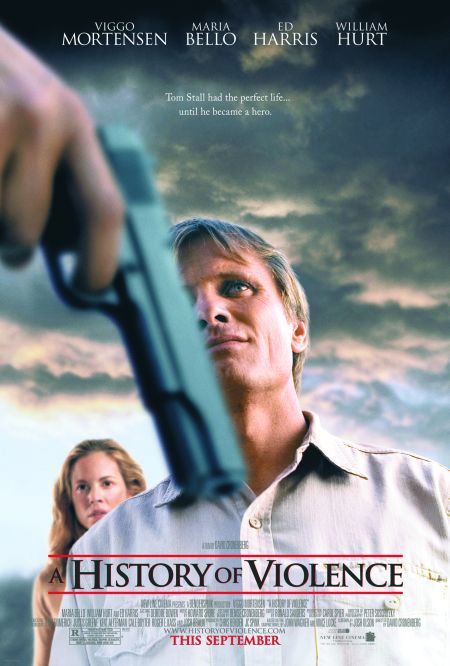