“Living in a small New England town myself, I can attest to how uncannily realistic the town and the people in it appeared to be.”

The opening Hallmark Card scene paints a deceptively pretty postcard picture of this small New Hampshire town, Lawford, that is covered with a late fall snow, as a young elementary school-aged girl wearing a red Halloween mask, Jill (Brigid), is guardedly speaking to her policeman/crossing guard father, Wade (Nolte). She is asking him if he was bad as a child, doing Halloween pranks, as he warily but unsuccessfully tries to respond to her while driving his police car. They have just left his ex-wife’s place, which is in another town about a 1/2 hour away, and are heading for a children’s Halloween party he arranged with his boss, the town selectman, Gordon LaRiviere (Holmes), especially for her sake, even though she doesn’t feel comfortable with the town or with him and would rather be home with her mother. His former wife Lillian (Mary Beth Hurt) is someone he married twice and who is now married to someone else, and can no longer relate to him and his angry mood swings.

After dropping the unhappy Jill off at the party being held at his police station, Wade leaves to go off smoking some weed with his much younger friend and fellow town snow-plower, the complacent, Jack Hewitt (True). He shares many of Wade’s feelings about the town they were both born in, but is mostly whining about his chance to play minor league baseball for the Bosox coming to an abrupt end and how he is now broke and everything seems to be leading to a dead-end.

We soon see that Jill really detests the visitation she has with her emotionally distraught father even as she tells him that she loves him, she still can’t wait to get back home to her loving mother. A nasty scene develops as Jill reacts to her unhappiness at being there, by calling her mother and asking to be taken home. When her mother arrives with her new husband Wade goes slightly ballistic, scaring the hell out of the child.

There is a voiceover and the rich discernible voice of Willem Dafoe (Rolfe) is heard as he relates that this is a story about two brothers who were afflicted by pain and violence, by an abusive and alcoholic father, Glen (Coburn). This is the story as told from his point of view, about the criminality of his brother and how it can be explained. But for most of the film, it is through Wade’s narrow focus that we see what is taking place. We don’t even get to see Rolfe until about after an hour of the film has elapsed; but, even though he has distanced himself from his family situation and is teaching now at Boston University, he keeps daily contact by phone with his older sibling who rattles on about his divorce, telling him that he is going to Concord to get a lawyer, foolishly thinking he can get custody of the child. He also rants about his personal bitterness and the emotional difficulties he is constantly having. Since Rolfe pictures himself as the survivor of the family, the less physical of the two, he tries to help out Wade with his more rational insights, grateful that his brother had acted as a protector for him when they were growing up in a house with a demonic father and an angelic mother, but a mother who seemed helpless against the rages of her husband.

This is another Russell Banks novel based film that has been well-suited for the big screen (a recent one was the more meditative, “The Sweet Hereafter“).

“Affliction” depicts how a man can go over the edge, just lose it completely one day, and that there is nothing anyone can do to prevent it. The inward turmoil of Wade is constantly being stirred by all the disappointments he feels about himself and his memories, which are magnified by what he experiences daily in this small town. Outwardly we see how run down he has become, even for the brief time when he is not drinking. His constant toothache and not going to see a dentist is overworked symbolically into the story, but it does show how he is also “afflicted” with physical pain that he can’t readily handle; and, how he, eventually, but painfully, solves this problem by pulling his aching tooth out with a pair of pliers.

Jack takes an influential visitor (McCann) from Massachusetts out hunting and the union big shot shoots himself by accident. Wade, backed up by his brother’s shared opinion, thinks that this isn’t an accident but, perhaps, a professional hit done by the Mafia or that the Mafia hired Jack. When Wade becomes obsessive about the accident, ranting on to Jack and his boss about their part in the crime, his brother tries to tell him that he was mistaken that he should forget about it and just concentrate on straightening out his own problems.

Wade’s one chance for genuine affection is with the local waitress, Maggie (Spacek), who cares for him deeply and is willing to put up with a lot of his unpleasantness because she knows his situation and how much he has been hurt. There is the tragic visit she makes with Wade to his parents’ house where he introduces her to his dad. This visit is so draining for Wade, even as Maggie acts as a buffer between him and his still verbally abusive elderly father. The visit ends upon the discovery that his mother froze to death because his father failed to get anyone to fix the furnace.

Because we see the gunshot accident through Wade’s neurotic eyes we are never quite sure what it is we have seen. But by the time the movie winds down and Wade unravels we see how pervasive the corruption is in this economically depressed town, and we hope that Wade can move in that direction to get the guilty culprits instead of chasing something he only imagined. But since this story is mostly a psychological thriller, we are caught in the web of Nolte’s very compelling characterization. He is someone who puts us into his shoes, so that we can’t help but seeing what a tormented person he is. We are really unsure whether a crime was committed or not until everything seems to come into place and we realize how far gone Wade has become. Nolte is so good in this role, that we can actually feel Wade’s traumas reverberating within us.

The other standout performers are Brigid Tierney, who almost steals the film from the veteran actors Nolte and Coburn because of how genuine she comes across in her very pertinent role as a young child having to distance herself from a father she is afraid to love. Coburn is convincingly good as the cold-hearted father, who recognizes that his older son has inherited his traits. His iconoclastic and memorable portrayal of an abusive father, is very hard-hitting and refreshingly original. Holmes Osborne and Jim True look and act as if they stepped out of the streets in rural New England, and were actually who they portrayed on the screen. Sissy Spacek was her usual sweet self. These characterizations made the bleakness of the story delightfully credible and penetrating.

Living in a small New England town myself, I can attest to how uncannily realistic are the town and its people.

Schrader (the director of “Taxi Driver“) is uniquely suited to do this type of film. He makes the most of this absorbing look into these troubled men’ psyches, holding up a mirror of truth to see if it is still possible for those who are so troubled to see themselves in someone else and to astutely ascertain what it is they are doing to themselves. One of Wade’s greatest fears was that he was becoming like his father.

Creating a portrait of how a dysfunctional family is without being trite about it is not that easy to accomplish, especially since this kind of subject matter is old news by now. But this film accomplished that by creating an edgy mood piece that has to be watched carefully, because it is filled with plenty of jewels for those who are willing to dig them out in the dark spaces they are to be found in.

That is not to say that this film didn’t have moments of reaching too far afield and failing miserably; such as, trying to make Wade out to be a Christ figure when he’s doing his job as a crossing guard. He stretches his arms out in a crucified position, as Mel Gordon (Adams) representing the “new” money in town disrespectfully speeds by him and Wade futilely tries to give him a ticket. The Wade we see for most of the film is the good guy, willing to get along with all the other locals. But the Wade we finally wind up with is the volatile Wade, who proves himself to be capable of taking someone’s life and not capable of overcoming his horrible childhood or his alcohol affliction. 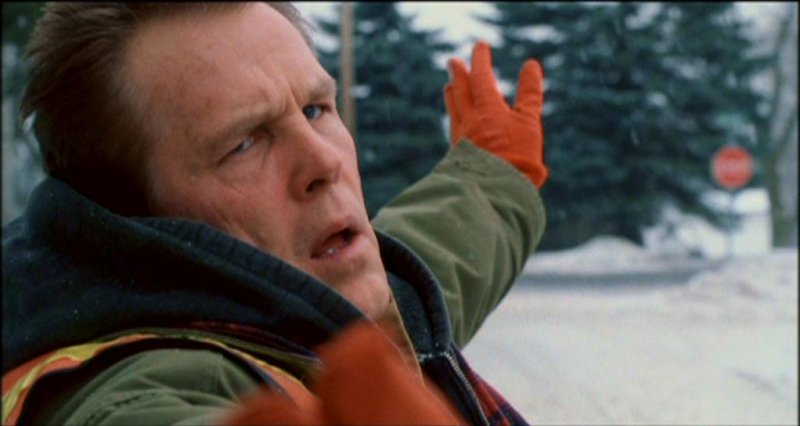