“The film was crude and the comedy was outlandish more than it was funny.”

A screwball comedy about a 32-year-old overweight comic actor, Akbar Abdi, who idolizes Charlie Chaplin and only wants to make good films like his hero. Instead he becomes rich and famous by making inane films, and is recognized everywhere he goes in Iran. His family and his agent want him to continue making crappy films that are popular, as they believe artistic films will not earn him good money.

Meanwhile, Akbar’s main problem seems to be at home. He marries Simin, in a marriage she doesn’t consider real because her mother didn’t attend. She acts insane (she goes fishing outside her apartment window) and is made frantic because she can’t give him an heir. She tries a magic potion of a witches brew mixed with the urine she gets from a neighborhood child out of trickery, and fools Akbar into drinking it. But it doesn’t work. So she moves to Plan 2 and goes to a gypsy camp in Tehran and arranges a business deal with the petty-criminal family to have their deaf-mute daughter marry the actor and have his child.

The film is filled with comic skits and the actor lamenting how he can’t go on living in such agony, as he’s embarrassed about what the neighbors will say if they find out that his wife is nuts. The sources of comedy are the following: their apartment, as their furniture can be moved by remote control to disappear in the walls; Akbar’s gimmicky luxury convertible where he is recognized and people shout out questions to him while driving by; and, when he has a family spat in his car, people think it’s a film being made and they are serving as extras as the action spills out to the highway stopping traffic.

The film has a serious side to it, as it opens with the following quote: “Those who cry only have one problem, those who laugh have a thousand and one problems.” From that quote, it can be assumed that Mohsen Makhmalbaf was making a political statement about how artists in his country are considered crazy and are either ignored or locked up. There was a bitter irony behind the comic antics of “The Actor,” as the film played itself out as a political comedy. The director seems to be implying that to get by in modern Iran, one must learn how to be an actor.

The film was crude and the comedy was outlandish more than it was funny. I think it was more localized in attitude than universal, therefore a foreigner like myself couldn’t get all the humor. 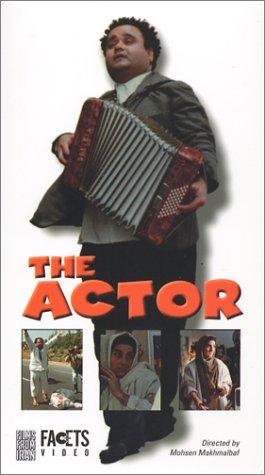