49TH PARALLEL (aka: THE INVADERS)

“The rousing war drama managed to be a better propaganda film than most such films.”

A strikingly atypical propaganda film by the team of Michael Powell (“A Canterbury Tale”/”The Red Shoes”) and Emeric Pressburger, aided by writer Rodney Ackland. It was arranged by Britain’s Ministry of Information in the belief it could convince America to enter WW11 and improve Canadian support for the war. It makes a compelling case for its argument as well as turning out to be an entertaining film by being fair-minded, richly imaginative, and suspenseful. It also features a superb cast. Though it certainly preaches its case continuously, is talky, and on retrospect seems dated in parts, but its episodic description of stranded German U-boat crewmen and their violent foray into Canada is filled with chilling moments that intercuts with an invigorating ongoing debate on freedom versus totalitarianism. Not all the Germans are smeared with the same inhuman brush strokes and made out to be rigid Nazi fanatics. The most memorable scenes are in the Eskimo primitive territory, where it was grippingly shown how far reaching the threat against civilization has become in the modern world and how democracy benefits even those who are minorities and outcasts. It was the biggest grossing film in the UK in 1941, and the biggest grossing British film in the US at the time. It received three Oscar nominations, winning for Best Original Story.

When the U-boat 37 is blown up in the Hudson Bay, above the 49th Parallel (the border between Canada and North America), for bombing supply ships and invading neutral territory, five unsympathetic crewmen led by the Nazi Lieutenant Kuhnecker (Raymond Lovell), whose U-boat just refused aid to a torpedoed British ship, do not go down with the ship because they were put on shore to make their way to neutral America. The German seamen soon overtake a wilderness trading post manned by the Factor (Finlay Currie) and try unsuccessfully to force their views on their captives.

An apolitical French-Canadian fur trapper Johnnie (Laurence Olivier) dies rather than succumb to the Nazis, as he’s shot trying to warn a short wave radio caller about the present danger. After the Germans wantonly kill a number of Eskimos and the pilot of a seaplane sent to investigate the radio report, they steal the plane but Lieutenant Kuhnecker is killed by an Eskimo hunter.

The Nazis crash-land the plane in the wilderness and join a Manitoba Hutterite farming community of utopian believers, with their new leader the fanatical Nazi Lieutenant Hirth (Eric Portman). Most commune members are refugees from German backgrounds, but all respond in a negative way to the Nazi message and their request for recruits. When Vogel (Niall MacGinnis) becomes converted to their kindly Christian ways and yearns to be a simple baker again, and feels relieved when told by the leader Peter (Anton Walbrook) he’s welcome to stay, he’s executed by Hirth for being a traitor.

The three remaining Germans make their way to Winnipeg and are heading, in a change of plans, to Vancouver to catch a Japanese ship. They are made out to be heroes by the German propaganda machine back home, as they are viewed as a few members of the Master Race standing up to 11 million Canadians. This is despite killing 11 innocent civilians and brutally mugging a guy changing his tire so they could steal his car.

During a touristy Indian Day celebration at Alberta’s Banff National Park, the Canadian Mounties alert the crowd to be on the lookout for the Nazis. When the nervous Kranz (Peter Moore) tries to run away, he’s arrested by the Mounties. The two Nazis who are left, meet up with effete Brit author Philip Armstrong Scott (Leslie Howard) in the Rocky Mountains; Scott’s an amiable chap living in a teepee among the Indians to do research on their folklore. Hirth becomes hostile toward the Englishman’s talk about comparing the old-time barbaric Indian tribal ways to Hitler’s speeches, Matisse, Picasso, and Thomas Mann, and goes berserk burning the book and destroying the paintings.

Freeing himself from Hirth’s captivity, Scott chases the Nazis into the woods with the help of the others in his camping party. When Lohrmann (John Chandos) is captured by the brave Scott, Hirth is left alone. In the final episode, Hirth tries to flee to America by freight train by crossing Niagara Falls as he overtakes an AWOL Canadian soldier (Raymond Massey), but is surprised when he meets resistance and the film ends when the American customs agents send the train back to Canada so Hirth can face up to his crimes.

The rousing war drama managed to be a better propaganda film than most such films. It humanized the Nazi adventurers on-the-run and told the story through their eyes of how those who blindly follow such evil leaders will be misled and go down a path of darkness. This was an effective way of indicting the Nazi cause. But the film was criticized in England for its sympathetic portrayal of the Nazis, causing Powell to write to The Times to defend the film. 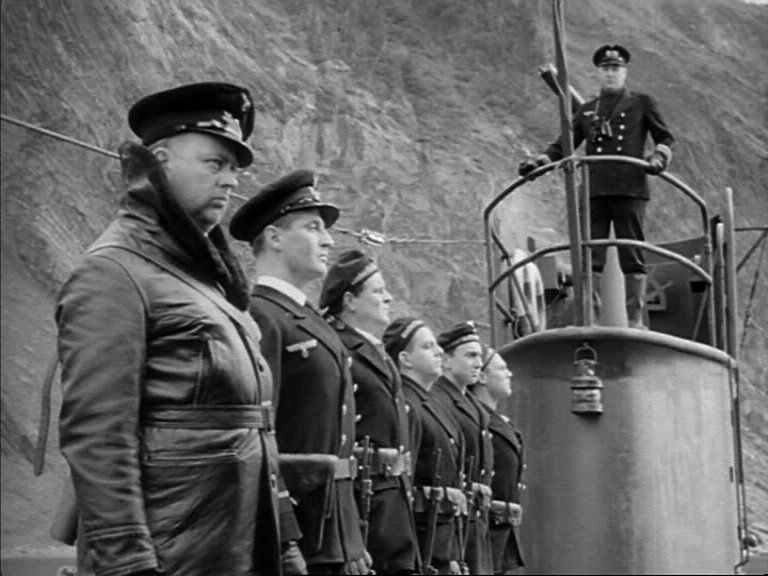