10 QUESTIONS FOR THE DALAI LAMA

“A refreshing, informative and worthy documentary.”

A refreshing, informative and worthy documentary from American-born world traveler filmmaker Rick Ray. He sits down in a 45-minute interview, in the modest monastery residence of the exiled Tenzin Gyatso, the 14th Dalai Lama, in Dharamsala, in northern India, and asks the lovable and humble Tibetan with the great giggle and smile, perceived by many as the “rock star of peace” and one of the most recognized and beloved figures in the world, the ten Charlie Rose like softball questions such as: “Why are the poor traditionally so much happier than the wealthy?”; “Is it necessary for a society to abandon its centuries-old traditions to move into the future?”; and “How does one committed to nonviolence respond when faced with inevitable violence?” The Dalai Lama playfully hits them all out of the ballpark and leaves us with wise responses to some of the fundamental problems of our time that are worth pondering, especially by the contemporary world’s political and religious leaders who exhibit so much negative energy and can’t get together to solve these pressing concerns with words instead of bullets.

Rick arrived in India to shoot a travel video, an interview with the Dalai Lama was supposed to be the carrot that made him take that assignment. When he discovered that no one arranged the interview, he arranged it himself by e-mail and got the interview for three months later. He was much worried about embarrassing himself, so he spent the time smartly learning as much about the Tibetan religion as he could in that period. He stayed in Dharamsala, a small city of about 20,000 that was filled with Tibetan refugees, foreign hippies and tourists. He also journeyed to Nubra Valley and stayed in several Tibetan monasteries.

The film is invaluable for being so inspirational with its Dalai Lama role model, as it emphasizes self-development and self-discipline as crucial for mankind’s development. It shows rare historical footage and tells through photos about the early childhood of the Dalai Lama–born in 1935 and made Dalai Lama in 1938. Rick also gives a valuable summary on some of the Tibetan religious practices not well-known in the rest of the world (such as how the Dalai Lama is chosen as a child by picking out correctly the 13 possessions from the other Dalai Lamas). He presents a brief but necessary overview of Tibet’s conflict with a China which is exercising cultural genocide on it and has destroyed their monasteries, subjected the people to political tyranny in the name of modernization, burned their books, religious icons and art, refused to allow photos of the Dalai Lama or the subjects will be jailed, have arrested in 1995 the child picked by the Dalai Lama to be the Panchen Lama (the one in charge of selecting the next Dalai Lama), have caused a flood of Tibetan refugees to flee their homeland in horror and have since 1949 killed 1,200,000 Tibetans.

With all those atrocities the Dalai Lama, nevertheless, has only peace in his heart for the Chinese, saying in the long run nonviolence is a more powerful medicine than the short-term gains induced by violence. For His Holiness, the destruction of your enemy is only the destruction of yourself. He’s, of course, anti-war, an avid environmentalist, an advocate of women’s rights even if it goes against customs in Tibet (anything outdated should be chucked), will choose science over religion if the two come into conflict and expounds on a number of other key issues showing how generous and tolerant he is to others and how he believes what makes America a great country are its democratic principles and not its nukes.

He seems too good to be true or too advanced in his pacifism for most of the world, but he practices what he preaches despite having a rougher road to take for peace than even Gandhi. Viewers might be surprised how this unpretentious little film is not preachy or academic, but is really a lot of fun because of the Dalai Lama’s bubbly personality and optimistic outlook on life despite how messed up the world presently seems. 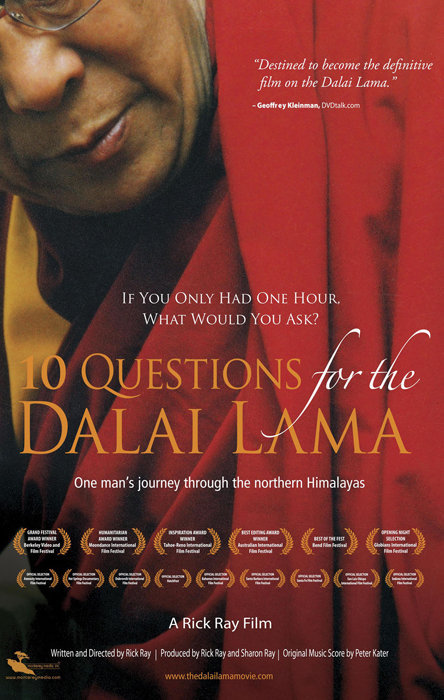